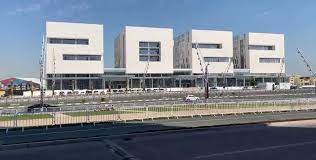 Geoffrey is a Kenyan migrant worker who was employed in Qatar as a security guard. In June 2022, he was arrested by Qatari police, detained for eight days and then deported; prior to his deportation he had been working as an investigator of labour rights abuses with NGO Equidem.

Geoffrey, who wished not include his surname, said he remains inundated with hundreds of messages from workers in Qatar and across the Gulf seeking help.

During his four years at Qatar he had worked as a security guard and safety inspector at Lusail Stadium and Al Janoub Stadium, venues built for the upcoming Qatar 2022 World Cup. He stated that his work was not activism but raising awareness among migrant workers of their rights. Stressing that he had never broken the law, Geoffrey said he had been “harassed” by the Qatari authorities and decided to speak about his case to send a warning to rights groups and football governing bodies before the World Cup.

Recounting the moment Qatari police detained him, Geoffrey said they arrested him in his shorts “in the middle of the night” and then took him to a deportation centre. He was in complete isolation, and his phone was taken away from him. He spent eight days in detention with no friends or family contact.

“Thousands of workers remain stuck in the familiar cycle of exploitation and abuse thanks to legal loopholes and inadequate enforcement.” Qatar had deported dozens of workers who held a rare protest over unpaid salaries, at least 60 people detained by Qatar had been deported back to their country of origin. Rights groups have complained about unpaid wages and unreported deaths on construction sites.

Qatari companies used to operate a system called “kafala”, under which they sponsored foreign workers to come to the country but then prevented them from leaving their jobs.

Qatar, FIFA and sponsors still have an opportunity to salvage the tournament’s legacy by remedying the migrant rights abuses associated with the World Cup and adopting reforms to improve protections for women, LGBT people, and migrant groups – not just during the World Cup but beyond.

Since 2017, the government has introduced measures to protect foreign labourers from working in very hot weather, limit their working hours, and improve the conditions in workers’ camps.