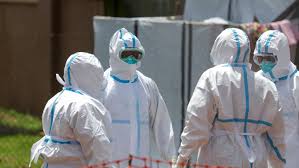 The World Health Organization (WHO) warned that Ebola’s arrival in the Ugandan capital highlighted the high risk of further spread of the deadly virus, calling on neighbouring countries to boost their preparedness.
Uganda’s Health Ministry first declared the outbreak on September 20, the country has registered over 150 confirmed and likely cases, including 64 deaths.

And since the deadly disease spread to Kampala last week, 17 cases have been confirmed there, WHO chief Tedros Adhanom Ghebreyesus told reporters.
These cases are linked to known clusters, the very fact that there are cases in a densely populated city underscores the very real risk of further transmission,” he said, speaking from WHO headquarters in Geneva, Switzerland.

According to health officials, the 42 Bed facility is designed to help patients recover quickly and also reduce the stress of isolation.

There are high-risk zones and they are what we call green Zones, where the family members can come and interact with the patients with a two-metre distance in between.

A recent explosion of Ebola virus cases has been reported in the Ugandan rural community Kassanda.

Officials said it began when defiant residents exhumed a body at night, undoing the work of a safe burial team in order to give the deceased man a proper Islamic funeral.

Within days, at least 23 of the mourners had contracted Ebola and three were dead, prompting Uganda’s health minister to say she hoped the members of the farming community in the district of Kassanda had learnt their lesson.

Ebola has infected 130 people and killed 43 in Uganda since September 20th, when the outbreak was confirmed in Mubende days after local officials first noted a “strange illness.”

Official figures don’t include those who died with probable Ebola before the outbreak was confirmed.

There is a “very urgent need for increased readiness in districts and surrounding countries,” he warned.Ebola is spread through bodily fluids, with common symptoms being fever, vomiting, bleeding and diarrhoea, and combatted through time-honoured ways of tracing, containing and quarantining.Outbreaks are difficult to contain, especially in urban environments.

Uganda’s last recorded fatality from a previous Ebola outbreak was in 2019.Tedros said the UN health agency on Tuesday released an additional $5.7 million from its contingency fund for emergencies, in addition to the $5 million previously released to address the Uganda crisis.WHO said was working closely with the Ugandan government and partners to respond to the outbreak and was calling for global response and increased donor investment.