At least 30 villagers were killed including women and children in Akwaya district South Western Cameroon by a rival ethnic group over land dispute between neighbouring communities aggravated by separatist insurgencies acting as hired guns. Some were burnt while others were beheaded. 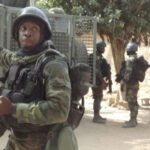 The Cameroonian military in the South West and North West regions in 2017 after civilian protests calling for greater representation for the country’s English-speaking minority were violently repressed.

Villagers in a western Cameroon town bordering Nigeria say armed men carried out a series of attacks from June 25 to 27, killing at least 30 people, including five Nigerians, and forcing hundreds to flee. The two regions had increased the number of violent actions this year, including killings, kidnappings and attacks on schools.

Community leaders in the town of Akwaya say one of the two communities fighting over land hired separatist fighters to carry out the shootings, which the rebels deny.

The violence in Akwaya district began when attackers from Mavass, backed up by hired gunmen, stormed a funeral ceremony on Saturday. It said the violence continued on Sunday.

At least 26 bodies had been found so far and people were still missing and the village’s Integrated Health Centre had been burnt down. This compares to a casualty toll of 22 dead and 30 wounded during the last cycle of Inter-communal violence.

A blurring of the lines between different types of conflict has become increasingly common across the English-speaking regions of Cameroon, where law and order has largely broken down, according to civil society groups.

Since January armed separatists had killed at least seven people, injured six, raped a girl, burned at least two schools, attacked a university and kidnapped up to 82 people, including 33 students and five teachers.