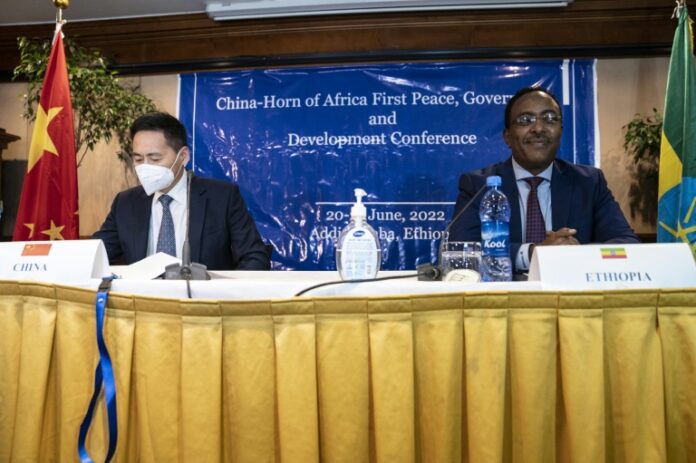 The first conference “China-Horn of Africa on security, governance and development” brings together until Tuesday in Addis Ababa China, represented by its special envoy for the Horn of Africa Xue Bing, Ethiopia, Djibouti, Kenya, Somalia, Sudan, South Sudan and Uganda, represented by a minister or an ambassador. Eritrea, invited, was not present.

China-led peace conference were foreign ministers or deputies from Sudan, Somalia, South Sudan, Kenya, Uganda and Djibouti. Notably absent was Eritrea, which teamed up with Ethiopia’s forces in the Tigray conflict and was among the African countries visited by China’s foreign minister early this year. Eritrea’s information minister didn’t immediately respond when asked about the absence.

China’s interests in the Horn of Africa include its first overseas military base, in Djibouti; oil investments in Sudan and South Sudan; manufacturing in Ethiopia; and a range of infrastructure projects.

The Chinese envoy in his speech noted “complicated and intertwined ethnicity, religion and boundary issues” in the region and noted they can be “difficult to handle, as many of them date back to colonial times.” China, like Russia, has stressed its lack of colonial activities in Africa to contrast with several European nations.

Let us take our own share of responsibility for the failure (of regional peace) and commit ourselves to take the destiny of our region into our hands,” Redwan Hussein, Ethiopia’s national security adviser, told the conference, noting the interest in avoiding “unwarranted external interference and undue pressure.” That was a theme of Ethiopia’s pushback against criticism from some in the West over the Tigray conflict.

Ethiopia also has been at odds with neighboring Sudan over disputed land and Addis Ababa’s construction of a huge and controversial Blue Nile dam that will be Africa’s largest hydroelectric power plant.