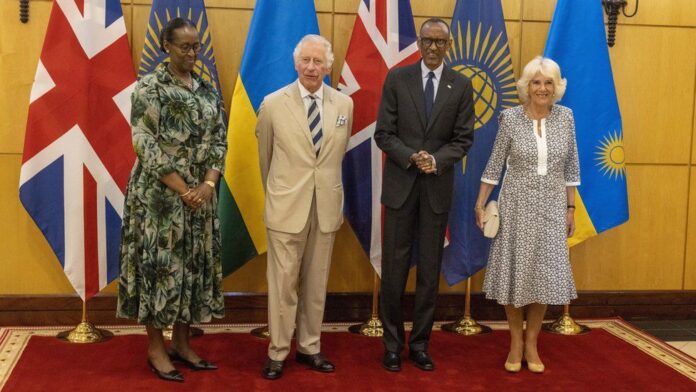 In 1994 hundreds of thousands of members of the Tutsi community were slaughtered in Rwanda by ethnic Hutu extremists.

The issue of genocide and reconciliation is said to be very close to the prince’s heart and he will visit a village that was targeted.

Prince Charles laid a wreath on Wednesday at a memorial to the 1994 genocide in Rwanda during the first visit to the country by a British royal.

The Royal couple visited the Kigali Genocide Memorial to pay respect, to the final resting place for more than 250,000 victims of the massacres almost three decades ago.

They also spoke with survivors of the genocide in which some 800,000 mainly Tutsi people were murdered by Hutu extremist forces over about 100 days between April and July 1994.

Housing skulls, bone fragments and shreds of clothing, the memorial is a confronting testimony to the horrors of the genocide and a customary stop for foreign dignitaries visiting Rwanda.

The victims’ remains are laid out in three main rows, and more have been buried as new graves are uncovered around the country.

Prince Charles and his wife Camilla also toured the memorial museum where they viewed photographs of the victims and their possessions and heard personal testimonials about the killings.